I am hoping that if you are voting in the upcoming election, you vote NO on prop 46. The reason, is that yes, on the surface it appears to be a drug testing requirement for physicians, however, the true underbelly of the proposition is to eliminate the MICRA cap on medical malpractice claims. The current cap is $250,000 and if prop 46 passes, the new liability potential goes to 1 million dollars.

Now, to any non-physician, that may seem like a fair deal, to lift the cap, but really one must look at the consequences of this. First consequence, the cost of liability insurance for physicians will also increase, putting a strain on providers in small clinics and outpatient programs.

Next, look at the reasons the cap was originally in place. It was appropriate then, and is still appropriate now.

Finally, any clinician providing care to a patient, only has a cap of $250,000 liability, but this changes for EVERYONE if the patient is a senior citizen, due to the Elder Abuse laws. If any negligence occurs on a senior, the liability is automatically increased to $1 million... so the cap of $250k doesn't apply here anyway.

Please vote NO on prop 46, and send a letter or note to your congressman and state representative, as well as your local council members and government reps, that we love the idea of drug testing for docs, but not when it is combined with a removal of the liability cap.


Here is a link to my article, on the Abbott Nutrition education website. Read it and take the post test to get 1 free nursing CEU.

Posted by woundcarewisdom at 2:55 PM No comments:

SWOC Certification course in LA at the Convention Center!
October 10, 11, 12, 2014
Includes LTC focused skin, wound, and ostomy instruction with skills lab on day 3. Certification exam is given on day 3. 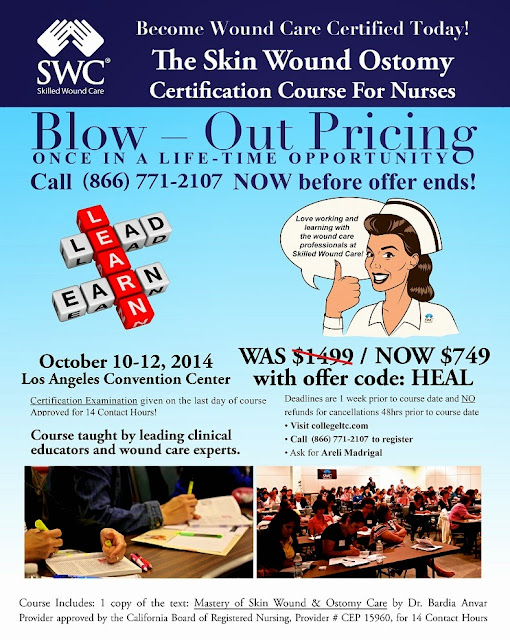 Posted by woundcarewisdom at 1:41 PM 4 comments:

What in the world am I talking about? What’s with that title? Wrong question. It isn’t what, but whom. Let me explain. We all know who I am talking about. In high school, he was “the” man... the star athlete, the remarkable scholar, the ladies’ man…whatever he was, he was ultimately “the” guy. Now he has graduated from high school, and he is no longer “the” man, he is one of many. He is “a” scholar, not “the” scholar, for example. He has to accept and succeed with the transition from “the” to “a.” How is he to find resolve in that? How can he accept that? What is the process of rebuilding the ego, the recognition, and the accolades? How does one transition successfully from “the” to “a”?


Over that four year period, I trained nine employees to do what I do. Each one would learn and grow, but would then move on to another facility after only 2-10 months. This wasn’t the plan. The plan was to train and keep committed peers, not train them to leave. Of those people, some went on to work their own wound care programs in another facility. Some didn’t fit the mold I was looking for—motivated, inspired, driven, precise, honest, and transparent. Some just couldn’t stand to be around me after a while, likely because my expectations seemed too high and unattainable by anyone else’s standards. I may have overexpected I now realize. Strong and steady though, I worked through those pitfalls and remained “the” wound care nurse.


Only recently, have I found the right peers—both whom are just as committed to wound care and patient advocacy as I am. Hoorah! I think, I don’t have to do this alone anymore! This should be the best time at work since I started 5 years ago! How amazing to finally have some help, right? Right? Wrong. I am struggling more now, than I ever did when I was working alone. Why is it such a struggle for me?


It wasn’t until I recognized my ultimate problem with the situation, that I have been successful in working through the issue. Now that I have two peers working with me, I am finding it very difficult to say that I am “a” wound care nurse. Somehow it feels like a demotion. It should be a relief, but it just feels so… so less-than. In the past, when an answer was needed about wound care, I was the one people called. When a problem was identified, they looked to me for the solution. When I called the unit nurse, or the doctor’s office, or the staffing office, to clarify who I was I would say, “It’s Kristie, the wound care nurse.” People knew who I was just by me identifying myself as the wound care nurse.


Transitioning from “the” to “a” has been a challenge. It was one of the biggest #careercurveballs I have faced so far, because at first I resisted this change. I became disgruntled, arrogant, and entitled. My attitude was bitter and pungent. I had lost my title, and couldn’t regain my own vision, my focus.


No longer a solo player in the sport of my work, I learned to be a part of a group, a collective effort, a team. In order to continue with the zest and success I initially had on my own, I was forced to learn teamwork, collaboration, respect, conflict resolution, professionalism, and emotional intelligence.


I have had more personal growth in one year, than in all the years I worked alone…and that enhances my professional growth potential more than anything else to date.
Posted by woundcarewisdom at 8:53 AM 1 comment:

I have noticed that patients and health care workers have opportunities that may not be that obvious. How a hospital stay is viewed will have an impact on the outcome for everyone.

Is the hospital a prison or a college for the patient?

As a health care team member, do you think of your patients as inmates or college students? I encourage you to begin to treat your patients as if they were in college, by acknowledging the actions that landed them here, inspiring them to take an active role in their health, and educating them on how they can take action to prevent complications and the worsening of their condition. A successful health care team member is one that recognizes this as the primary goal, and practices this in their role.

As a patient, you are the number one player, the MVP actually, on any health care team. How do you view your hospital stay?

Some of the patients I see tend to view the experience as if it were a prison sentence. Choices they’ve made have now caught up to them. They are here to serve out their punishment as an inmate. Though rehabilitation is possible, reentry is inevitable without some serious changes in lifestyle, and happens more often than not. These patients are here for treatment and treatment alone. Treatment unfortunately, is a reactionary practice, and we all know how reactions can go—some have unexpected outcomes and reactions are more of a gamble.

There are also the patients who participate in their hospital stay as if they were going to college. Whether knowingly or unknowingly, they have made choices that impacted their health, and they have landed in the hospital. Now that they are here, they view it as a gift, a wake up call, a near-miss or a near-loss. While they are here, they work to sponge up all of the knowledge they can, in hopes of learning as much as possible to prevent their condition from getting worse, or to prevent themselves from another condition or disease. These patients want prevention.

Prevention is the action, treatment is the reaction. Everybody plays a part in prevention. Whether it is prevention of a particular disease or unhealthy end, or prevention of further deterioration of an existing disease process, prevention should be the goal of any healthcare facility. Health care workers need to teach prevention and inspire patients to take part in it; patients need to be taught prevention, and inspired to practice it.

Rehabilitation and cure are much harder to come by, much more expensive, and more of a challenge than any prevention will ever be. Prevention can be slow and thoughtful, specific and practiced. Treatment comes at a high price—financially, emotionally, mentally, physically, and spiritually—and is rapid, stressful, and a gamble.

As a health care worker, it is time to recognize and live up to our role. We need to focus on prevention and treat our patients as if they were college students and we were their professors. Their success or failure is directly related to our ability to teach them and to provide them with tools and resources.

As a patient, it is time to recognize that you are not punished, you are not an inmate—rather, you just got a wakeup call and are a college student, and now is the time to learn how to stay awake for your own health.
Posted by woundcarewisdom at 8:42 AM 2 comments: