I don’t really know what it was. Something in me compelled me to explore further. I knew that nutrition was important, why didn’t anyone else realize this? I had been a wound care nurse for three years, focusing in the outpatient wound clinic arena mixed with inpatient consults at 3 sister facilities.

Regardless of wound type, I always had the Braden Risk Assessment Scale on my mind as I generated the wound treatment plan, so the “prevention” thought process was there, somehow innate as a nurse. Years four through nine in wound care were spent running an inpatient wound care program for a 400-bed acute care hospital. I just knew that nutritional status had an enormous impact on patient wound healing, but I didn’t have evidence to back it up, because I hadn’t looked into it. I just knew it was more important than it got credit for… and then I began to learn about it first-hand.

I had several patient care scenarios where poor nutritional status was highlighted for me, but I couldn’t get anyone else to buy-in to the fact that it played such a huge part in the outcome. It took a few, eh-hem, serious and adverse learning opportunities, before anyone in leadership started to listen. I had the pleasure of meeting our facility’s RD early on, during the review of one such adverse event.

She was very knowledgeable, and had felt her own frustrations reach the tipping point, so it was truly a match made in heaven when we met and began to discuss an acute-care-world where nutrition was given the respect it deserves. She was so willing to learn about pressure ulcers and prevention, and she was equally open to sharing what she knew about nutrition with me. What we didn’t know, between the two of us, we sought to find out, and what each learned was shared immediately with the other. Finally! Someone who got what was in my brain! Why? Because NUTRITION was in my brain, and she was an RD!

We made a great team, each of us excited about what the other had to share. We had figured out how to improve our patient outcomes, and worked tirelessly to show that to anyone who had a role in patient care. We began to collaborate...not just talk here and there, but to actively communicate about the patients we were seeing. I began referring patients to the RD team, and she began informing the wound care team about patients with poor nutritional status. This open communication helped me to really understand what it meant to have an interdisciplinary team involved in the care of a patient.

We thought, “How can we make this better?” because by the time RD was brought in, there were already wounds present, or the patient was already malnourished. And by the time the wound care team was brought in on a patient, they already had a pressure ulcer or a wound. How could we empower the nurses to take action?? We both realized that for every Braden subscale category, there were actions the nurse could take to intervene, but for nutrition, the only action was passive: to initiate a referral to RD. We decided to change that.

What else could the nurse do for nutrition? We needed to empower the nurses with interventions that took action for the patient. So we did. We created an oral nutrition supplement protocol. The RD established criteria and I helped determine criteria for prevention of pressure ulcers or wound healing. Together we came up with 5 simple categories of triggers that the RN could easily identify, which would then be used in the decision tree for oral supplementation. The categories and triggers were: 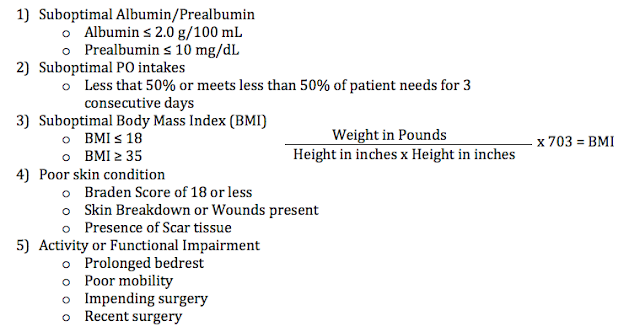 What we learned through this active, engaged collaboration between RD and Wound Care, was that we could make a big difference in the outcomes for our patients, if we opened up to each other and started utilizing the talents we each have, to focus our care for the patient.

Posted by woundcarewisdom at 9:05 PM 2 comments:

I just received the greatest email in my inbox. Kudos to Lippincott for addressing current events and the effect on health care, specifically nursing practice. I hadn't thought of this being anything at all, but after receiving this email, I guess I have to expand my way of thinking. Again, KUDOS to them!! Here is what the email said:


Caitlyn Jenner, formerly known as Bruce Jenner, recently completed gender transition changing her physical appearance to align with her self-identification as a female. Last week Vanity Fair tweeted its latest cover featuring Jenner. This story has raised awareness of the struggles and misperceptions that are often faced by the lesbian, gay, bisexual, and transgender (LGBT) population. In our role, we need to be aware of special considerations in order to provide culturally-sensitive care to all patients.

On Lippincott NursingCenter, we have many resources that will provide you with the information you need to understand the unique health concerns of this population and overcome healthcare disparities.

Additional resources can be found under the LGBT topic area on our site and for CE credit, we've bundled a selection of this content at a discounted rate in our LGBT CE Collection.

Also, be sure to check out our eBook, LGBTQ Cultures: What Health Care Professionals Need to Know About Sexual and Gender Diversity. This eBook serves as an overview and introduction to the health concerns and care for the LGBT community.

HOW COOL IS THAT EMAIL?? Thank you Lippincott!!! Helping us all to become better nurses and to continually show compassion for things we may otherwise not. I appreciate it! 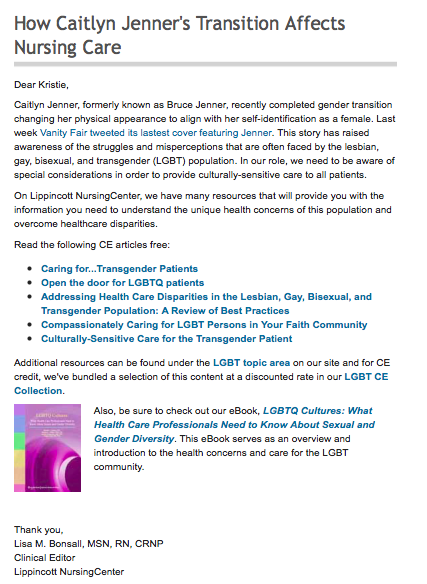 Posted by woundcarewisdom at 8:26 PM No comments: